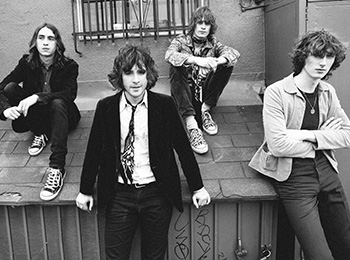 On Wednesday 12th August, Pretty Green Presents will be hosting the Hidden Charms single launch of AA side ‘Dreaming Of Another Girl / Long Down’ produced by Shel Talmy (The Kinks / The Who) at our Carnaby Street store between 6- 8pm accompanied by a DJ set from Gary Crowley.

Hidden Charms are a London based band signed to the relaunched Deltasonic Records best known for signing The Coral, The Zutons and The Dead 60's. Following a successful tour and sold out debut headline London show the band start their Club NME Koko Residency this September.

There will be 20 signed vinyl AA side ‘Dreaming Of Another Girl / Long Down’ to buy at the gig and attendees will be entered into a competition for a chance to win 1 of 2 signed vinyls.

From inception music has been a pivotal part of Pretty Green, with events hosting DJ’s such as Tom Meighan, Tim Burgess, Steve Craddock, Mani and bands that include The Gramotones, The Rifles, Pretty Reckless and The Moons.

This live element to the brand has developed into a regular fixture in some of its 14 stores nationwide. Where up and coming DJ’s and Bands, mixed with some established names, have a chance to play in store.

‘Pretty Green Presents’ has evolved out of this coexistence and is now an official platform to showcase new talent. This is a unique way for bands to either play live in store, at a venue under the PGP banner or launch their creative work.

If you’re in a band and want to play a Pretty Green presents gig. Email us at pgpresents@prettygreen.com

Gig Review: The Rifles at Koko