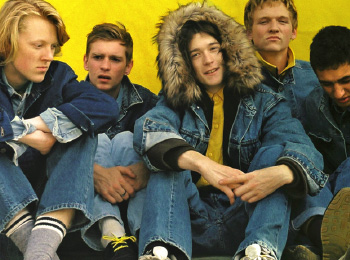 Brighton based 5 piece, White Room, have released a video to new single ‘You’ll See,’ ahead of this weekends appearance at the BBC Introducing Stage at Reading and Leeds Festival.

The band have gained a strong following recently due to their stand out live shows and dynamic sounds which bring together elements of punk, indie-rock, Britpop and Psychedlica. Followers include photographer Hedi Slimane and the legendary Paul Weller who stated, ‘White Rooms songs are getting stronger and more defined. ‘Fizzy Liquid’ is a testament to that. A band to watch out for.’

The new EP ‘Fizzy Liquid,’ is set to be released on the 4th September and is said by the band to ‘really reflect where were at right now, they are all brand new songs that we finished and recorded pretty quickly.’ The EP was recorded at Wellers Black Barn Studio and will be launched at the Hope and Run in Brighton on the 8th September. This will be followed by live London dates at The Amersham Arms on the 24th September and The Good Ship on the 15th October.

Check out the ‘You’ll See’ video

Gig Review: The Rifles at Koko