The Isle of Wight Scooter Club 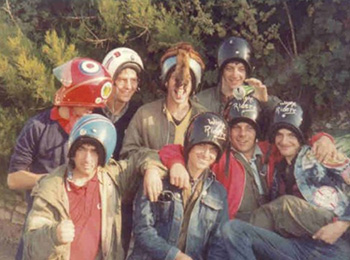 The Islands longest running Scooter Club. KEEPING THE FAITH Since 1980.

It was during 1979 that the name & first designs were created, there was constant talk of starting a scooter club but really there were just groups with scooters that hung out together. We had little more than a name IW Jaguars that was agreed on, we had no badge or patches, no club decals/stickers etc. and only haphazard meetings but people were getting away to scooter bank holidays weekends together.

By 1980 The IW Jaguars was established & running by “Jock” Nick Warren, Sandown, he was the clubs very first No1, at the start he had no committee & had to try & run things with very little help, for our first no1 we could not have started with a better choice.

During this time we never had more than 10 road going scooters & when we did manage to get into double figures it was like a major step had been accomplished. Meetings were few & were often held as a basic discussion during a break taken on a local ride out, The Vine Inn at Newport was one of the first places that types of meetings were held. Local runs were often from Newport’s Coppins bridge car park or the Barley Mow pub.

Les Gustar, Cowes had been doing some of the background work for the club & by 81 was the next club no1 & along with his girlfriend Pauline as secretary. Their first task was to mail every known scooterist on the Island about a meeting, Jock had agreed we could use his flat for this in Sandown.

On the day Wednesday 22 July 1981, pretty much everyone who was mailed or had flyer's left on their scooters, all turned out, The flat was creaking at the seams with people, Les Gustar held a very frank discussion about moving the club forward & building on the membership, the structure was set at this meeting that what was to carry the club forward, eventually changing its name to the Isle of Wight Scooter Club its become one of the UK’s longest running scooter clubs in the country which still has regular ride-outs and meet ups today.

Founding & Key members - No1 was the leader of the club.
Nick warren [jock]no1
Les Gustar no1
Rob Gustar [Reg]no1
Jimmy Drake no1
Roger Pike [rew] no1
Chris Dove no2
Simon Winter no2

Share the history of your Scooter Club. Email your stories to scooters@prettygreen.com