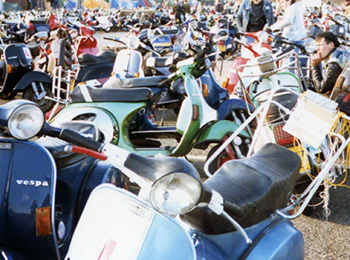 A personal account by Steve Robson and Les Gustar

Since the very late 1970's there had been various reports in the media of scooters turning up in numbers at seaside towns on Bank holiday weekends. The nearest seaside invasion was at Brighton, that was where most club members travelled to. So it was a big surprise for the Island community and the Police force when, on the August Bank holiday of the weekend 23/24/25th of 1980, the Modrapheniacs, Scooter Club, Dorest,Portsmouth Cavaliers, the IW Scooter Club and a few others converged on the Island with Ryde being the main focus point.

There was trouble, and not just in Ryde. Most Island towns that scooters visited that weekend saw a certain degree of unrest. Local authorities had to cancel leave for the Police and drafted in reinforcements from the mainland. It was a weekend that for most who experienced it would not forget. It was history in the making, but obviously no-one at the time realized it. The carpark at Appley Woods was the site, with deckchairs used to build the fires and tents pitched on the grass/golf course.

The following Easter (1981) and there were rumors about the Island being pinpointed for another scooter invasion. Hostile comments were constantly being voiced, and using the local media tried to put a stop to any scooters attempting to get onto the Island.

Fears were somewhat allayed as the Island was not first choice at the National scooter club No1's meeting as the Isle of Man was the preferred choice for the August Bank holiday. However the Manx government imposed a ban on all scooters for this younger generation of scooterists. It was a simple case of if it’s not the Isle of Man the Isle of Wight will do.

So thanks to the Manx government the Island got its very first national scooter run, August bank holiday weekend 29/30/31st.1981.

August Bank holiday weekend came and very quickly, the mainland ferry terminals were swamped with scooters, very few of who had bothered to book in advance so it was chaos. The Island police commandeered Smallbrook stadium for use as a rally site.

Today it is called " the biggest scooter run/rally in the world". It really is an international event, public attitudes have mostly changed, likewise the authorities, and the event means different things to all people. From its roots as a violent weekend for a few hundred scooters the Isle of Wight national and scooters have come a long way and is in the most warmly welcomed by locals, its part of scootering history as is The Isle of Wight scooter club being on the very first run until NOW.