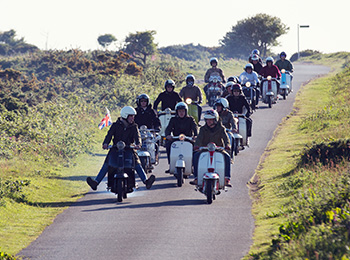 Two icons of the scooter world, Lambretta and vespa have gone head to head for years. We take a look at these two iconic brands and the famed scooters that have shaped modern subcultures from the streets of Rome to the coastal roads of the Isle of Wight.

1. I have always been a Lambretta man, I think for me it was the combination of the sleeker styling and the fact that the original Italian manufactures ‘innocenti ‘ brand of Lambretta’s had stopped being produced, so seemed more vintage, plus I didn’t particularly like the new scooters Vespa were making at the time.

Also I found Lambretta’s very simple to work on, with a lot of the models having many interchangeable parts. Although a lot of Vespa guys would say the opposite, as Vespa’s had fewer parts and were generally more reliable. I think if you were mechanically mined you went for a lambretta if not, then a Vespa was the easier option and would get you to work on time!

Lambretta’s , I felt also offered more scope to customise, with removable panel work you could paint or chrome easily and there were a wide range of bolt on accessories available. Although to be fair, as the years have passed I have grown to like Vespa’s more and more; particularly the older models, but Lambetta’s with their great styling, range of models and the company’s fantastic marketing used in the fifties and sixties to sell there ranges, will always ensure I stay a Lambretta Man.

2. I own a 1967 Lambretta SX 200 , which for me is the premium model, looks amazing, with sleek 60’s lines It’s the scooter I always wanted and was lucky enough year’s later to end up owning one.

I admire Vespa’s but for me the Lambretta is a superior design, the Vespa’s engine is mounted on the side while the Lambretta in the centre so I find it a better ride as for me, as it feels more balanced.

I also love all the extras that were made for Lambrettas during the sixties, and have been collecting rare old sixties accessories ready to fit to my Scooter, even though it’s proving an expensive hobby!!

1. I own both Lambretta and Vespa Scooters, I love my 1957 Lambretta LD, it looks great, it’s like a piece of engineer art and for its day was technically advanced. However nearly 60 years have passed and so I now respect its age and treat it like art, so it sits in my living room looking splendid!

I ride my Vespa P200E daily, its quick, has decent brakes and starts every time, so for me Vespa is for riding Lambretta’s for preserving.
Kevin Downer- IOW

2. I have been riding scooters for 35 years and always loved Vespa's, style, reliability and looks of course, ridden them all over the UK as well as to Spain, South of France, Italy, Croatia, Germany etc. part of the image that I discovered in 1977 from getting into bands ,The Jam and The Who.

Timeless quality and style that even at being over 50 a motorbike could never replace! As for Lambretta's I have owned the best two ever made an SX200 that appeared in The Who's Quadrophenia show at Hyde Park and of course the Serveta Jet 200 customised as 21st Century Breakdown by Green Day. Although would never own anything else than a Vespa, particularly now being President of The Vespa Club of Britain.

Robin Quartermain. Chelmsford - President of the Vespa Club of Britain.