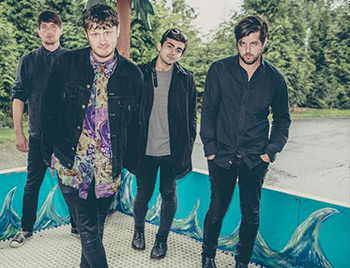 
The second album, which is the follow up to the 2013 album ‘Shimmers Gold,’ takes influences from the political situation of 2015. Lead vocalist, Tom Rowlett, uses these issues lyrically to enhance the record sparked by the loss of his fathers job, forcing him to leave London. For Rowlett this signified everything that was wrong in modern Britain: property bubbles and gentrification forcing out the local working classes, a government that doesn’t care.

These issues were brought together to create an album of defiance, that’s lived a life and fought for a future. ‘’There’s a message, there’s a social conscience, reacting to the sh*t that’s happening around us. We love music, being on tour, playing to our fans and getting away from the boring side of life.’

With a great reception and huge crowds at the Isle Of Wight Festival and a few other summer festival appearances, the band get ready for a very busy end of 2015 with their month-long UK Tour which starts in November.

THE ENEMY: ALBUM RELEASE "IT'S AUTOMATIC"