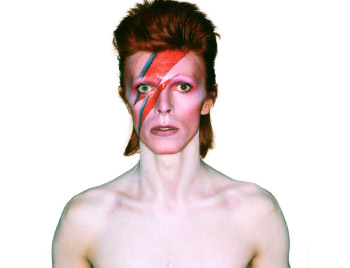 On Monday January 11th 2016 the world was deeply saddened when shortly after his 69th Birthday and release of his greatly anticipated 25th album release, David Bowie sadly lost his battle with cancer.

From Ziggy Stardust to Aladdin Sane and Thin White Duke, David Bowie was unarguably the king of style and reinvention, changing his look more than any musician in history. His fearless self expression took center stage in the rock and roll world as did his friendships and collaborations with artists such as Lou Reed, Iggy Pop, Mick Jagger and John Lennon.

A showman until the end, Bowie’s life was a work of art, including his last album and creative project ‘Black Star’ featuring the single ‘Lazarus’. In light of the fact Bowie knew his life was coming to an end, this now seems like a farewell message, with lyrics such as ‘Look up here, I’m in heaven’ seemingly speaking directly to his loyal fans around the world.

A true visionary, Bowie was one of a kind, his music and individual style having a monumental impact on fans and many creative industries worldwide. His friend and long term collaborator Mick Rock said of Bowie


“He was in a way like a mod, the principle of a mod being always changing, the latest this and the latest that, but David was kind of beyond the latest thing because he was off doing his own thing, out ahead of everything. “
- Mick Rock

Indeed, this notion of Bowie out ahead of everything seems very fitting. He was almost supernatural in his ability to pioneer both musically and visually a whole host of characters and experiences for his audience, woven together in a colourful and unforgettable body of work that spanned several decades.

We take a look back at some of our favourite fashion moments to celebrate the icon:

Bowie was a showman, style chameleon, a boundary breaker and an optimist for the future, creating his own style instead of following the crowd. A legacy which will continue to inspire many generations to come.