Inspiration Behind The "London Mod" Collection 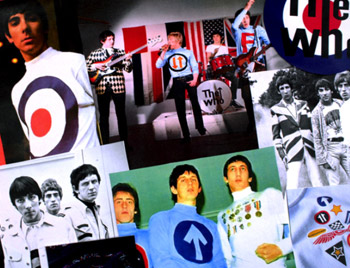 The Who were the band to define early mod style, their look, sound and high energy performances becoming the pinnacle of the working-class movement of rebellious teenagers in post-war Britain who obsessed over all things new and ‘modern.’

The Who’s style was predominantly made up of the mod essentials- the smart button down shirts, clean cut tailored pieces and red, white and blue graphics. An memorable piece was Keith Moon’s pop art style target T-shirt. A symbol which became a key element of mod iconography, and was also incorporated into the bands logo. This pop art inspired logo, designed by Brian Pike for a gig poster, never actually featured on an album by The Who but found its way onto badges and other merchandise making it the iconic symbol it is today.

‘A lot of the girls came to see the group because of various things the people in the group wear, such as Johns jackets, and my jackets made out of flags and Keith who wears lots of fab gear, pop art t-shirts made out of targets and hearts and things.'

The mod style was heavily influenced by pop art. A movement recognising that mundane everyday items like font, street signage and symbols could be something beautiful. This was a notion most famously expressed by The Who through the use of symbols such as arrows, brightly coloured union jack jackets and clashing prints.

Our own interpretations of mod symbols and lyrics from popular songs by The Who, are incorporated onto jersey and knitwear pieces using a number of techniques to bring the prints to life, such as a textured applique design and intricate embroidery.