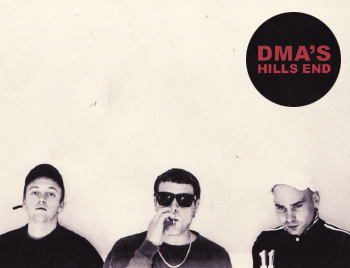 DMA’s are a trio based in Newtown, Australia best known for their nostalgic garage pop vibe. The three friends Johnny Took, Matt Mason and Tom O’Dell began writing songs in Johnny’s bedroom studio, all gaining instant attention without having released an official track or playing a single show. After signing with label I OH YOU, their debut single ‘Delete’ received rave reviews and record of the week from XFM.

Regarded as ‘The Ones To Watch’ in 2016 by NME and with A list support from the likes of Radio 1, 6 Music and Radio 1, the band have been described by Dave Roundtree of Blur as having ‘the swagger of Oasis and the musicality and inventiveness of Arctic Monkeys.’

‘Hills End’ was released on February 26th, was mainly recorded by the band in guitarist Johnny Took’s bedroom in Sydney, bringing together the influences and endeavors of the past three years of each individual.

Took is said to be heavily inspired by folk artists like Bob Dylan, ‘American guitar bands from the 90’s’ For Mason and an English influence from frontman O’Dells Liverpudlian dads like for The Beatles, The Stone Roses and The La’s. The inspiration behind their music is what makes the DMA’S sound so enticing and the album is looking to be one of the most exciting releases of 2016.