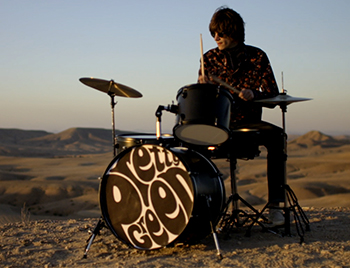 ‘A band is only as good as its drummer’
- Bobby Gillepsie, Primal Scream

Primal Screams Bobby Gillepsie’s quote regards drummers as the most important factor of a band.

Whilst many front men and lead guitarists often take the spotlight on stage, the drummer is often regarded as ‘the one in the background’ very rarely receiving the same recognition as the fellow bands members.

Rock and Roll history has many examples of times when bands went down hill on the departure of the drummer. Keith Moons death didn’t stop the Who continuing but it is regarded by many as the turning point for the bands music, Led Zeppelin sensibly didn’t continue after John Bonhams death in 1980 and Keith Richards has often said that the only thing that would stop The Rolling Stones would be the departure of Charlie Watts as drummer.

A great drummer can transform a band into different styles of music through the way they can create a different rhythm to a song- providing the foundation of the song for the other band members to follow.

Unlike a series of front men and lead guitarists and despite being arguably the most important figure in a band, famous name drummers are sparse. We take a look at the top drummers of all time:

Inspiration to many other famous drummers and regarded as the greatest drummer of all time, John ‘Bonzo’ Bonham is known as the driving force of rock ‘n’ roll drumming beats. Iconic for his speed and power but also the sensual groove he provided.

Provided the loose, jazz beats that gave the band their groove. He continues to be at the center of the band providing the solid foundation for Mick Jagger and Keith Richards.

The Beatles and Ringo’s popularity saw a changing point in the recognition of the drummer as an important aspect to the band, with Ringo occasionally singing lead vocal and writing songs. Proving that the drummer isn’t just measured on their soloing ability.


Keith Moon - The Who

Developed an aggressive, hard driving style that saw recognition of the drummer as not just the support of the lead instruments. The inspiration behind the Muppets character ‘Animal’- known for his self destructive ‘Moon the Loon’ nature but this provided the spark that set him apart from the rest.

The departure of Topper Headon from The Clash in 1982 is said by Joe Strummer to be one of his ‘greatest mistakes; we stupidly tried to fix a clock that wasn’t broken. ’ Regarded as ‘The human drum machine.’ His simple drumming beats made up some of British Punks greatest hits such as ‘Rock The Casbah’ and ‘Train In Vain.’

Known for his precise drumming style. As drummer for both Joy Division and New Order, his style adapted with the band from punk to the New Wave 90's dance.

The influential figure in bringing the blend of indie and dance into the ‘Madchester’ scene, Reni’s laid back, off beat style has led to him being widely considered as one of the most influential drummers of his time.

The Pretty Green Spring Summer ’16 Journey of Paisley campaign looks into the role of the drummer and the importance of the figure within its campaign video.

The Evolution Of The Paisley Print