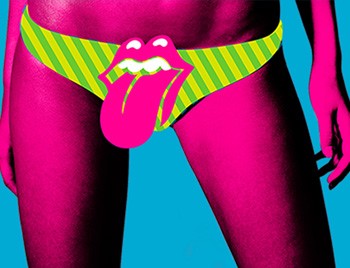 The Rolling Stones first ever exhibition ‘Exhibitionism’ opened Tuesday (5th April ), bringing to life the 54 years of the band across two entire floors of the Saatchi gallery.

The beginnings of the band are explored with a room devoted to Jagger and Keith Richards’ first meeting at Dartford station – where The Rolling Stones were born. There is also a reconstruction of their first flat in Edith Road, Chelsea.

Richards describes the flat as being a ‘pigsty,’ and this is shown within the reconstruction with hundreds of cigarette butts, empty packets of Player’s Navy Cut, and the sink piled with unwashed dishes. There is a flashback to the 60’s shown with HP Sauce, 99 Tea, Heinz Chicken Soup and 1963 copies of Melody Maker and New Musical Express.

A highlight to the exhibition is a Gibson guitar, decorated by Keith Richard whilst on acid and used during the filming of ‘Sympathy for the Devil.’

Original clothing worn by the band, extracts from Keith Richards diaries and portraits by Andy Warhol are also featured. More than 50 different screens showing stills and newspaper headlines about drug busts and some of the most iconic live performances take us back through time, all rounded off with an amazing exhibition finale.

Tickets are now on sale on the Saatchi Gallery website and Ticketmaster.

Inspired By Travel - Music In The 60’s