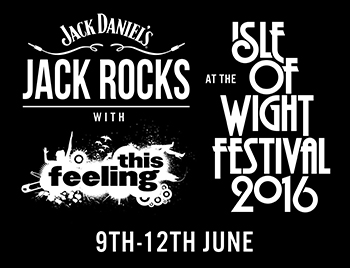 After the huge success of last year, Jack Daniel’s again partners with Britain’s most exciting rock ‘n’ roll club night, This Feeling. Together, they will host and curate a stage at the world famous Isle of Wight Festival, where The Who, Stereophonics, Richard Ashcroft, Blossoms and many more will perform to 90,000 revellers.

Confirmed artists for the Jack Rocks This Feeling stage include headline sets from YAK, Little Comets and Broken Hands plus a whole host of fantastic new bands. Full line up (alphabetical order) below.

John Giddings, Isle of Wight Festival main man commented:?“I’m really excited to welcome back the Jack Rocks This Feeling stage. This Feeling, one of Britain’s most dedicated champions of new music and Jack Daniel’s, a drink synonymous with rock ‘n’ roll, have proven to be the perfect partners in delivering amazing live music experiences. It’s great to see them joining forces yet again with an even stronger line up than last year. Their stage promises to be a fun place to hang out no matter what time of day or night it is!”

Jack Rocks is an initiative from Jack Daniel's that celebrates the power of 'real' experiences by supporting those who believe music should be made and enjoyed on your own terms. The Tennessee whiskey brand continues to work with This Feeling as a lead partner to curate live music events at independent venues and festivals across the UK for the foreseeable future.

For tickets & more info head to: THIS FEELING WEBSITE.