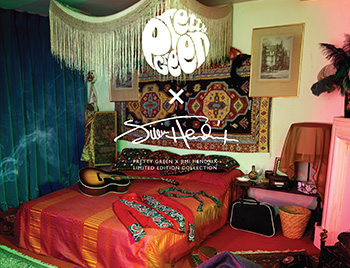 The advert for the Pretty Green X Jimi Hendrix collection was shot at the Jimi Hendrix flat on Brook St, London. The flat opened to the public this February after undergoing a restoration to return the rooms to how they looked when Hendrix lived there with his girlfriend Kathy Etchingham in 1969.

Hendrix described the flat as his ‘first real home of my own’ and spent a lot of time decorating the flat with rugs curtains and cushions aswell as ornaments and pieces from the nearby Portobello Road market. Hendrix had many press and media interviews and photoshoots in the flat.

The Handel & Hendrix museum in London is open to the public for tours, tickets and more information are available HERE.