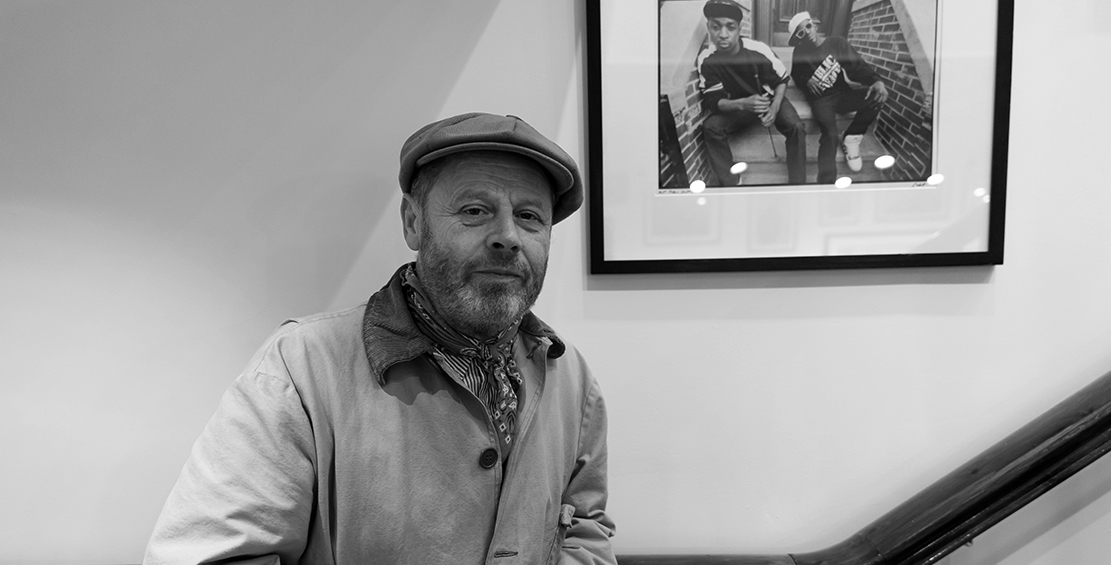 Pretty Green is currently hosting an exhibition of photographer Lawrence Watson at our King Street store in Manchester, running from 11th February until 6th March 2022.

Lawrence photographed the iconic Liam Gallagher Pretty Green shoot on Brighton Beach and has worked with many legendary artists over a career that has spanned more than 30 years. A few weeks before the exhibition began, we were overjoyed to have broadcaster and presenter Gary Crowley sit down with Lawrence (and his cheeky rescue dog Alfie) at Pretty Green HQ to look back over his illustrious career and tell us stories of photographing some of the most influential musicians of the 20th and 21st century, as well as give a us a little bit of his own artistic philosophy. 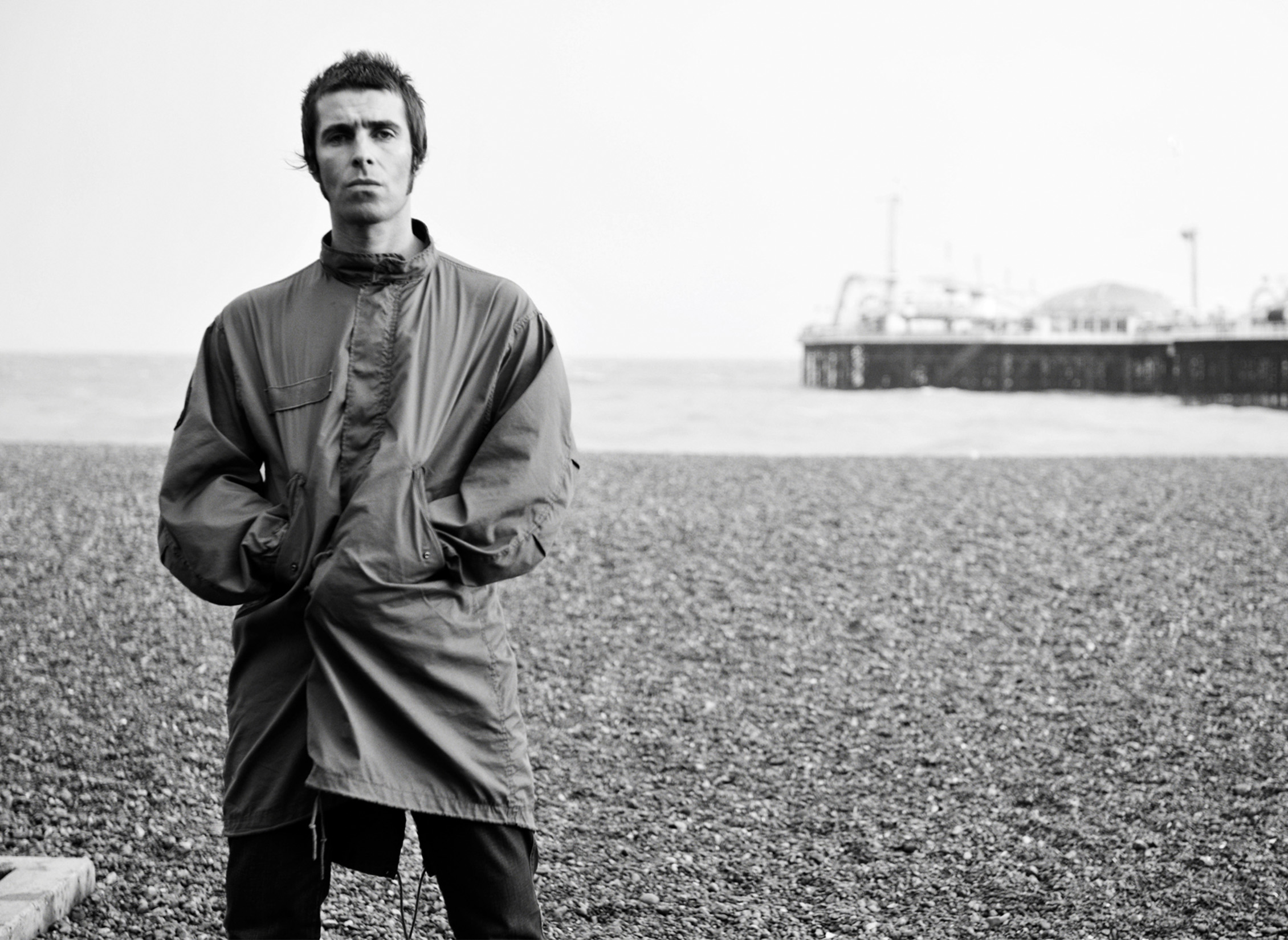 Lawrence describes his humble beginnings as a “scruffy herbert” attending St. William of Yorke Roman Catholic School in Islington - “the same place that produced John Lydon, but he didn’t stick it out, he bottled it!”. His first experience with photography came whilst completing (or “cheating at”) his Art O Level, and when he finished school he was told in no uncertain terms by his dad “you’re not going back to do A Levels, you’re going to get a job”, which he did via a Youth Opportunities Scheme at a photographic lab located 5-25 Rivington Street. “They were very good at encouraging me there.”

Lawrence was heavily influenced by the political and social upheaval that coincided with his adolescence. “At the early stage, I wanted to be a documentary filmmaker, ‘put the world to rights’, cover all the British Movement marches, the Anti-Nazi League movement things, the Bobby Sands ones… of course, that was the time of punk, so everything was pretty political back then.” His step brother David was a journalist for the NME, who at the time boasted photographic giants like Anton Corbijin and Jill Furmanovsky. 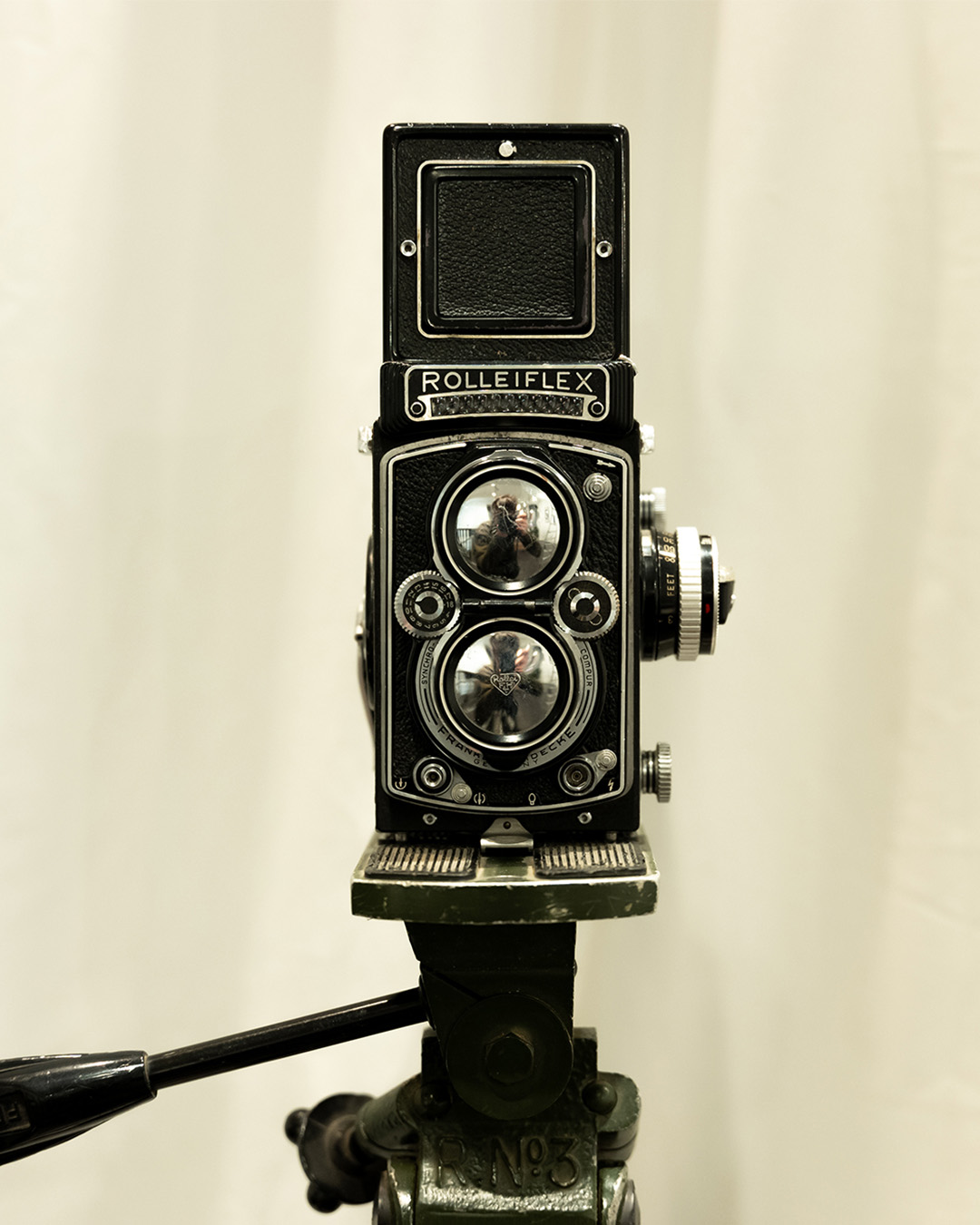 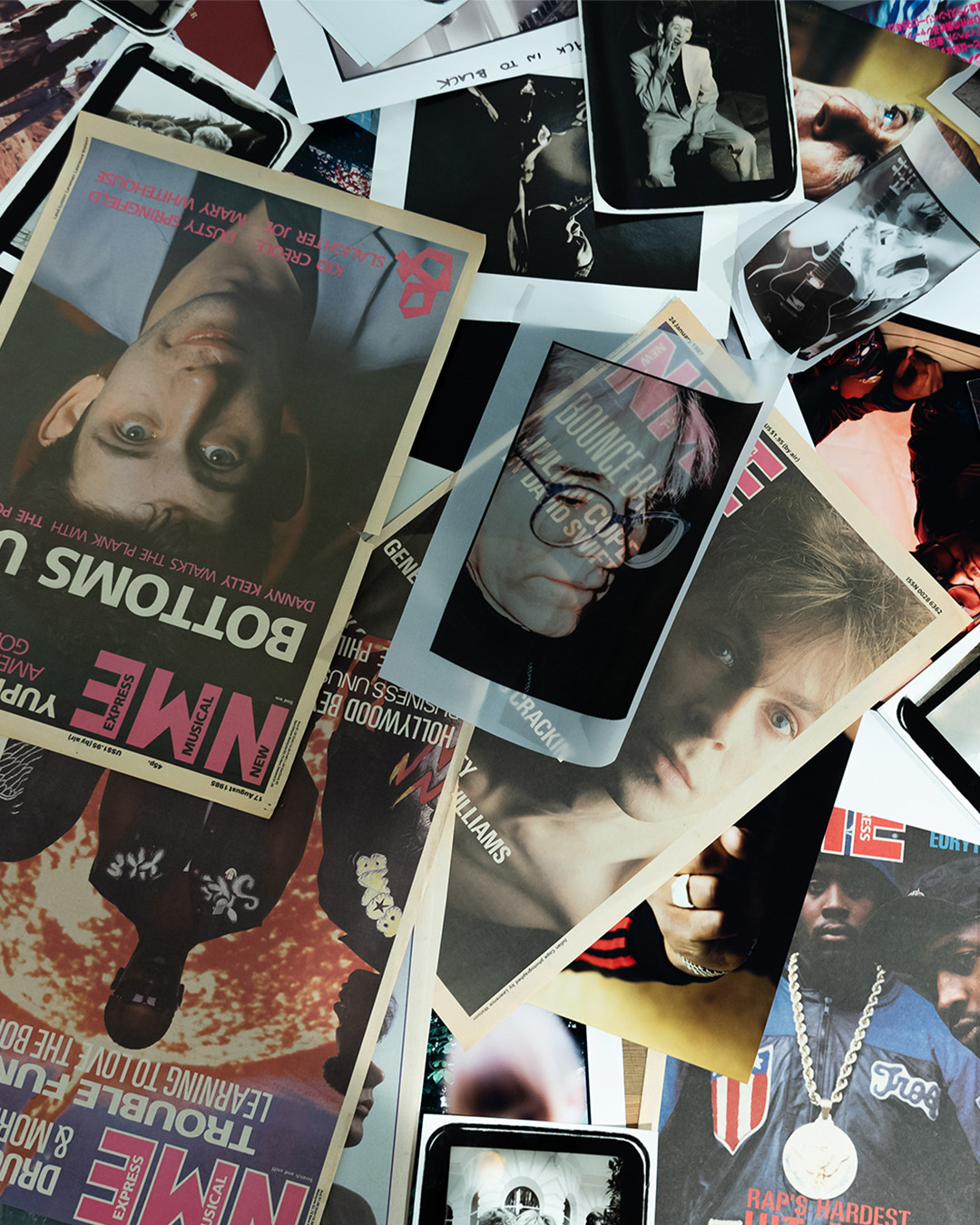 Lawrence started bringing his camera along to gigs and sending photos off to the NME for consideration. It wasn’t necessarily instant success though: “I’d had a knock back probably, I think, a good 5 or 6 times where they were out of focus, bad, too far away…” But in such a fiercely competitive industry, persistence is key. Lawrence’s first published photo was of the Bradford post-punk/goth rock band Southern Death Cult. “That was sort of an epiphany moment - maybe I can do this. I can take pictures and make some money from it as well.”

“I DON’T WANNA GET INVOLVED, I DON’T WANNA BE CHARLIE BANANAS, I WANNA BE THAT COFFEE MARK ON THE BACK OF THE AMP... I WANT TO DISAPPEAR AND THEN YOU DOCUMENT THE MAGIC.”

Lawrence describes his approach to photography as a fly on the wall, influenced by his early interest in being a documentary photographer. He wants to make people comfortable, but otherwise: “I don’t wanna get involved, I don’t wanna be Charlie Bananas, I wanna be that coffee mark on the back of the amp… I want to disappear, and then you document the magic… by nature I am quite shy and an unassuming fella and I like to be like that when I’m working as well.”

It’s undeniable, however, that Lawrence has an astute eye for an incredible image and that the photos he’s taken probably couldn’t have been taken by anybody else. He takes his work very seriously, with an approach more like that of a true craftsperson than a modern day dilettante. “If this [the Pretty Green office] was the location, I’d have turned up 2 hours beforehand, walked round every alley way and every nook and cranny to find something interesting.” He talks of having to have a plan B and a plan C in place in case of a knock back from the artist, as in the case of one Luther Vandross. “It was snowing in New York, looked magical, he had a white fur coat on, it would have been a beautiful picture, but Luther and his voice: ‘I can’t go outside Lawrence, I can’t go outside’... fair enough Luther, you’ve got your voice to protect.”

“HE’LL SAY IF HE DOESN’T LIKE SOMETHING. HE’LL LET US KNOW. BUT YEAH, I THINK HE HAS A LOVE OF THE SAME SORT OF PHOTOGRAPHY AND PERIODS OF MUSIC THAT I DO, SO THAT’S ALWAYS GOOD... NORMALLY MY POINTS OF REFERENCES ARE THE SAME POINTS OF REFERENCES THAT THEY’VE GROWN UP WITH, THE ‘60S FILMS, ‘60S MUSIC.”


ON WORKING WITH LIAM GALLAGHER

The first time Lawrence shot anything for Oasis it was for the cover of ‘Don’t Believe The Truth’, and that’s an indisputable instance of his own creative inspiration coming into play. “Noel wanted that graffiti of Don’t Believe The Truth, and they wanted it on some garage doors out somewhere on the end of the northern line… it was just before Christmas, I dunno what happened, I dunno if somebody had blown them out or something… they said ‘look we’ve got this Lawrence, are you interested in doing it?’ and I said yes, before Christmas it’s always handy to have something for the kid’s bicycle, so I went and shot [the album cover]. I shot it on lots of different films basically, lots of different cameras - Linhof panoramic cameras, I hired a fish eye lens and stuff… I tried to give them lots of different options… Noel went for the one that was just black and white, 35mm on that old Nikon I had with the fish eye lens, said it looked like a bit of a snowglobe… that became the album cover, then Emma at the office said [to me] everybody’s really happy with what you’ve done for the sleeve, do you wanna do their press pictures? And I said no way.” Of course, he did. 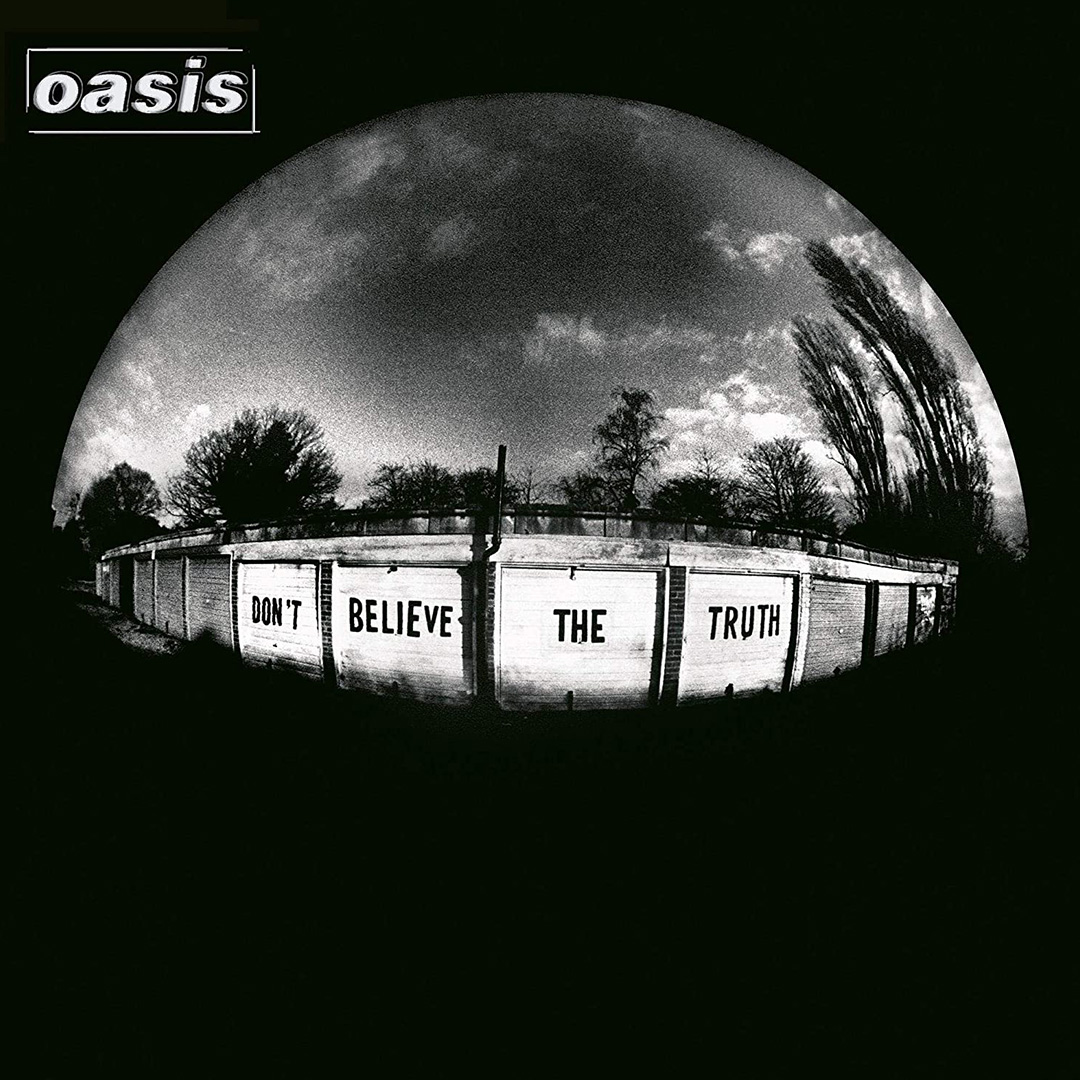 Lawrence went on to have a long-term relationship with Liam and would of course end up photographing the iconic Brighton beach shoot for Pretty Green. “It was our homage to Quadrophenia, so that was it, I was away and running. We’ll do the alleyway, we’ll do this, do that. They brought those lovely bikes down as well, I think they had copies of the original bikes. I don’t think they put petrol in them though, I think they had to wheel them everywhere. But it was a good day, yeah, it was an early start, Liam didn’t have a problem with that ‘cause we were trying to get the right light coming up over the cliffs and stuff in the early morning.” 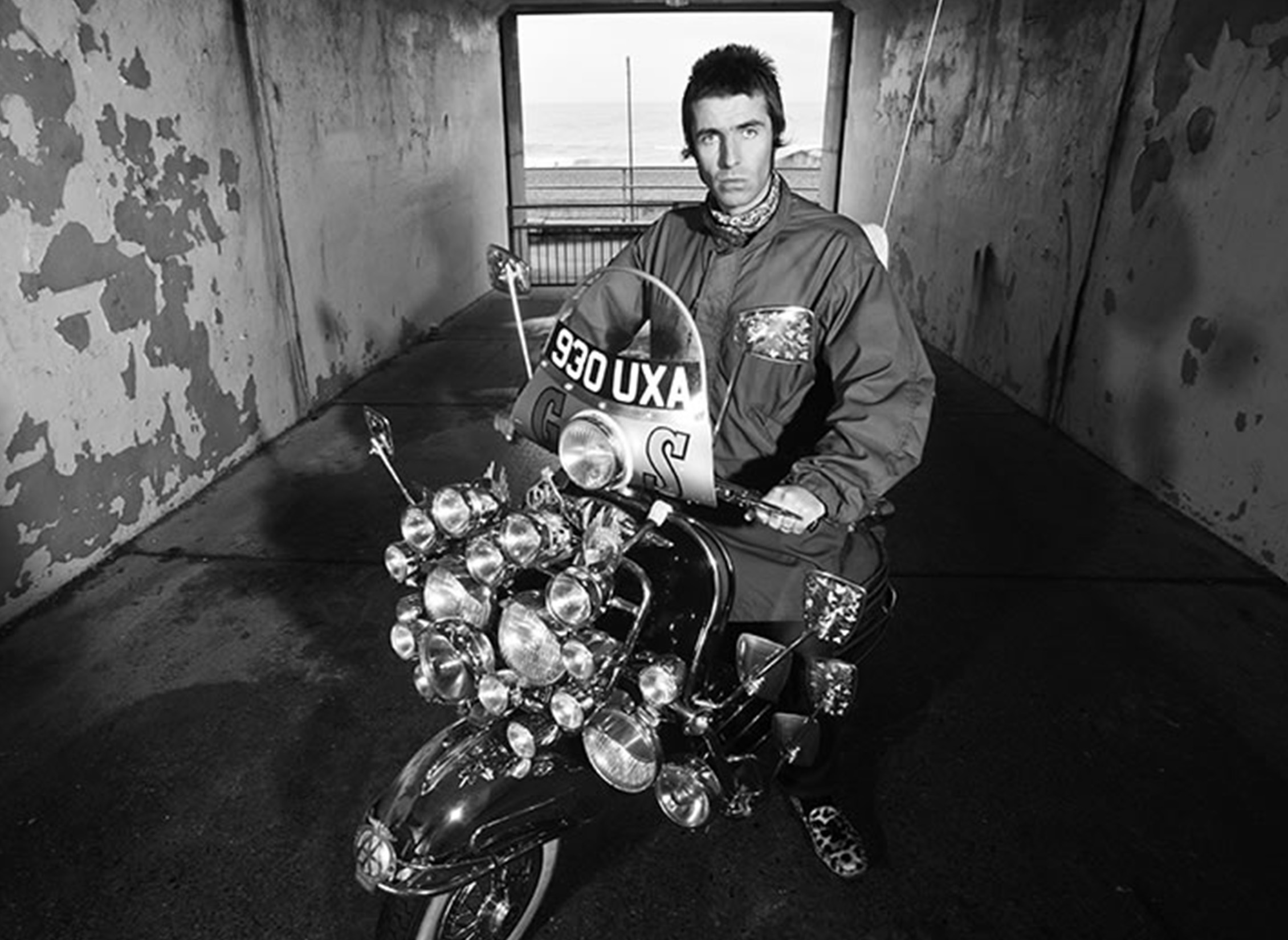 On working with Liam: “he’ll say if he doesn’t like something. He’ll let us know. But yeah, I think he has a love of the same sort of photography and periods of music that I do, so that’s always good… normally my points of references are the same points of references that they’ve grown up with, the ‘60s films, ‘60s music.”

It’s clear that the artists Lawrence has worked with can all be described as having a similarly devoted work ethic when it comes to their art. He wasn’t particularly bothered about Grace Jones turning up 6 hours late to their shoot because “she had a music video that someone had shot and delivered, but it wasn’t up to her standard, so she sat in the editing suite for 8 hours until she was happy with the video - then she came to the photo session, and you don’t get those stories a lot of the time… she turned up and we worked all through the night til 8 in the morning.”

“Speaking of Grace Jones though, how was it meeting and photographing such a legend? “Oh it was brilliant, I’d grown up listening to Grace as a youngster so I didn’t think I’d get the gig…” He’d taken some photos of Grace performing at Massive Attack’s Meltdown Festival and put them forward as a proposition for her ‘Hurricane’ album cover to Mark Jones at Wall of Sound records. “I said to him, look, I’ve got some live pictures if you can use them, and I [thought I] might get a bunce from it as well, that’d be great. He said, well, we’re actually looking for a photographer for the press shots. I said oh, it’s gonna be one of the fashion boys, it’s gonna be one of the names - [Mark] said no, put your hat in there or you’ll never know. I did, and Mark called me up a week later: ‘Grace wants to work with you Lawrence!’ Wow!” Was there any trepidation meeting the first time, or did the two of them hit it off immediately? “Yeah, we’re both mad, so that was good. That helps.” 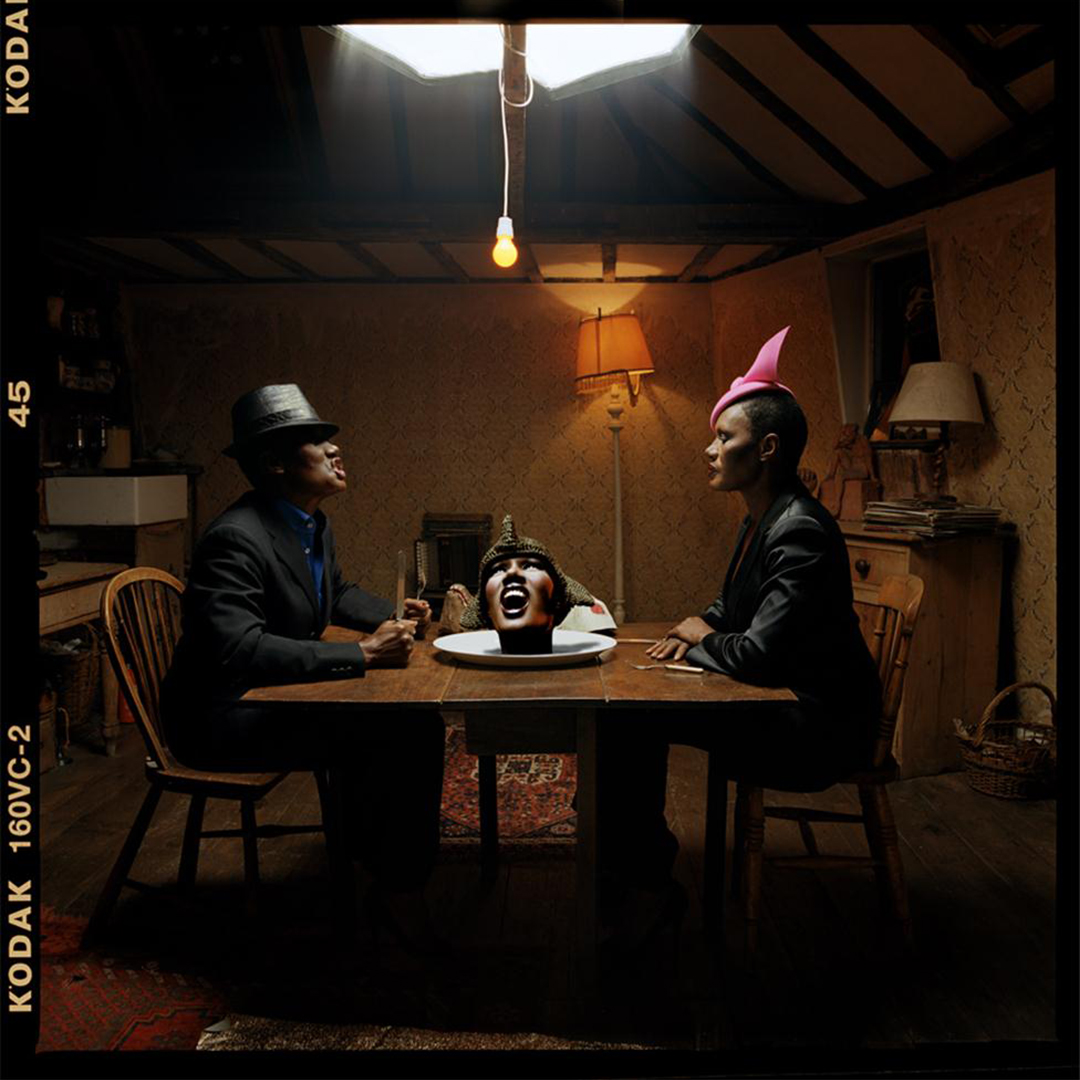 Lawrence goes on to tell of a night shooting with Grace at the legendary George Tavern: “Pauline, the lady who runs [The George Tavern] had a hula hoop from the Blackheath Festival, and Grace pinches the hula hoop says ‘I used to be a hula hoop champion in Kingston’, I said ‘f*** off you used to be a hula hoop champion’ and the next thing I know, it’s 7 in the morning, and she’s got the hula hoop round her neck in the middle of a roundabout. The postman’s come round and almost hit the curb: there’s Grace Jones on the roundabout with a hula hoop! Then I went down to the gig at the Roundhouse and she did the whole of Pull Up To The Bumper with a hula hoop round her neck.”

He’s managed to work with so many icons over the years, but is there anyone that’s eluded Lawrence as a subject? “Rick Rubin,” he says almost immediately. “There’s a picture I missed, and I didn’t realise the importance. I went and shot Run DMC, and they mentioned they were going to meet their producer, and it was Rick Rubin, in his NYU campus room, sharing a dorm with 3 other people and a load of Adidas boxes up one wall. I should have taken that picture, but I was young and I didn’t know what a producer was. I was like, 17 or 18? ‘What’s a producer do?’ I didn’t realise what Rick Rubin would go on to do, with Johnny Cash and everyone else.”

There was also another missed opportunity when on a session with Public Enemy. “I was too busy running to get a packet of fags… there was a point on the corner outside Def Jam where an old lady needed to cross the road, and Chuck D helped her across. That would have been a great shot, but I was too busy buying snout wasn’t I… you’re not gonna get everything…”

And lastly, if he hadn’t become a photographer, what would Lawrence be doing? “Probably bank robbery, like my Dad… I would have been very good at it.”

Head down to our Manchester store now on 19 King Street to catch the exhibition. Images will be on rotation until 6th March.

Tag your photos with #PGxLawrenceWatson 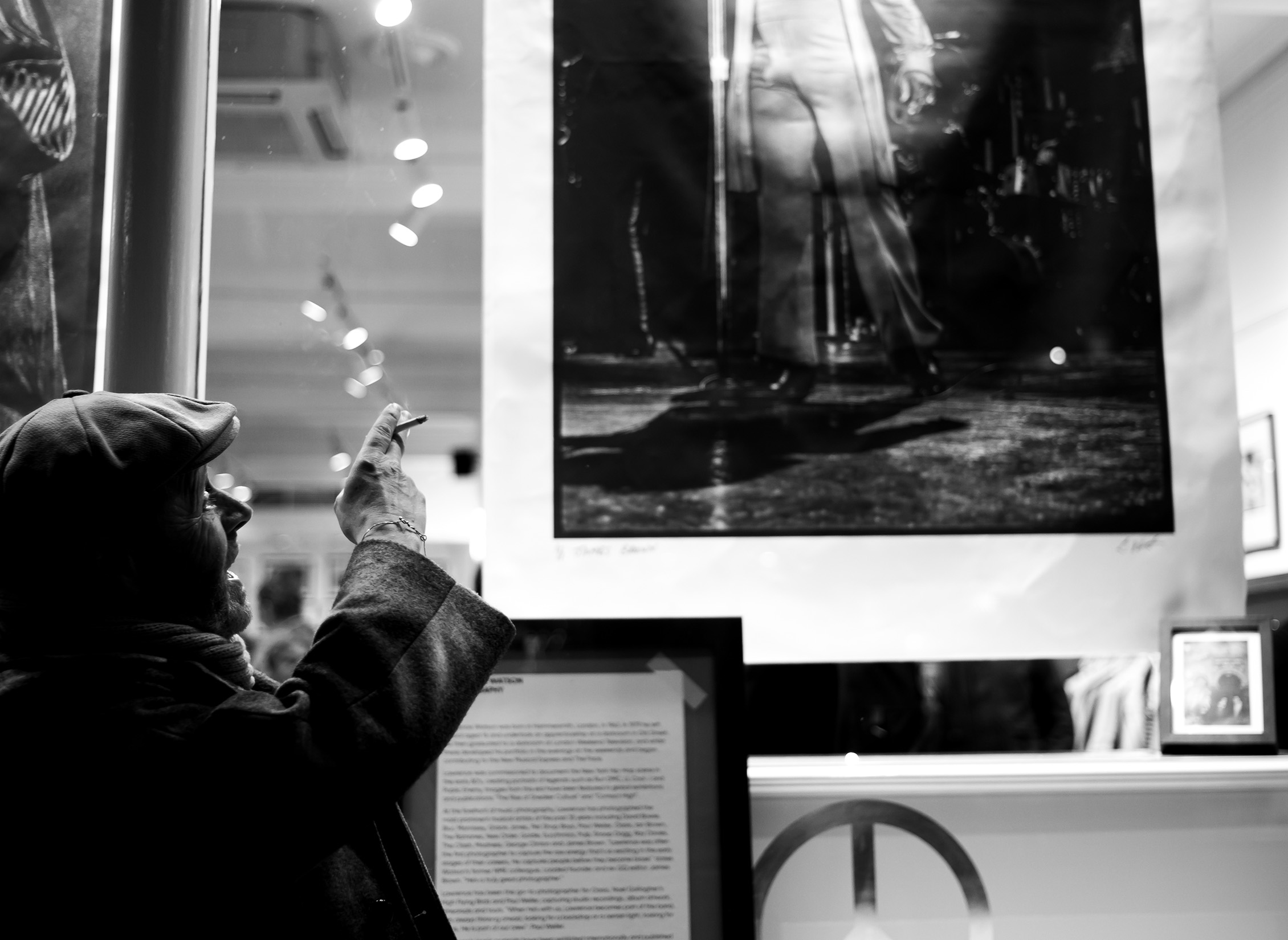