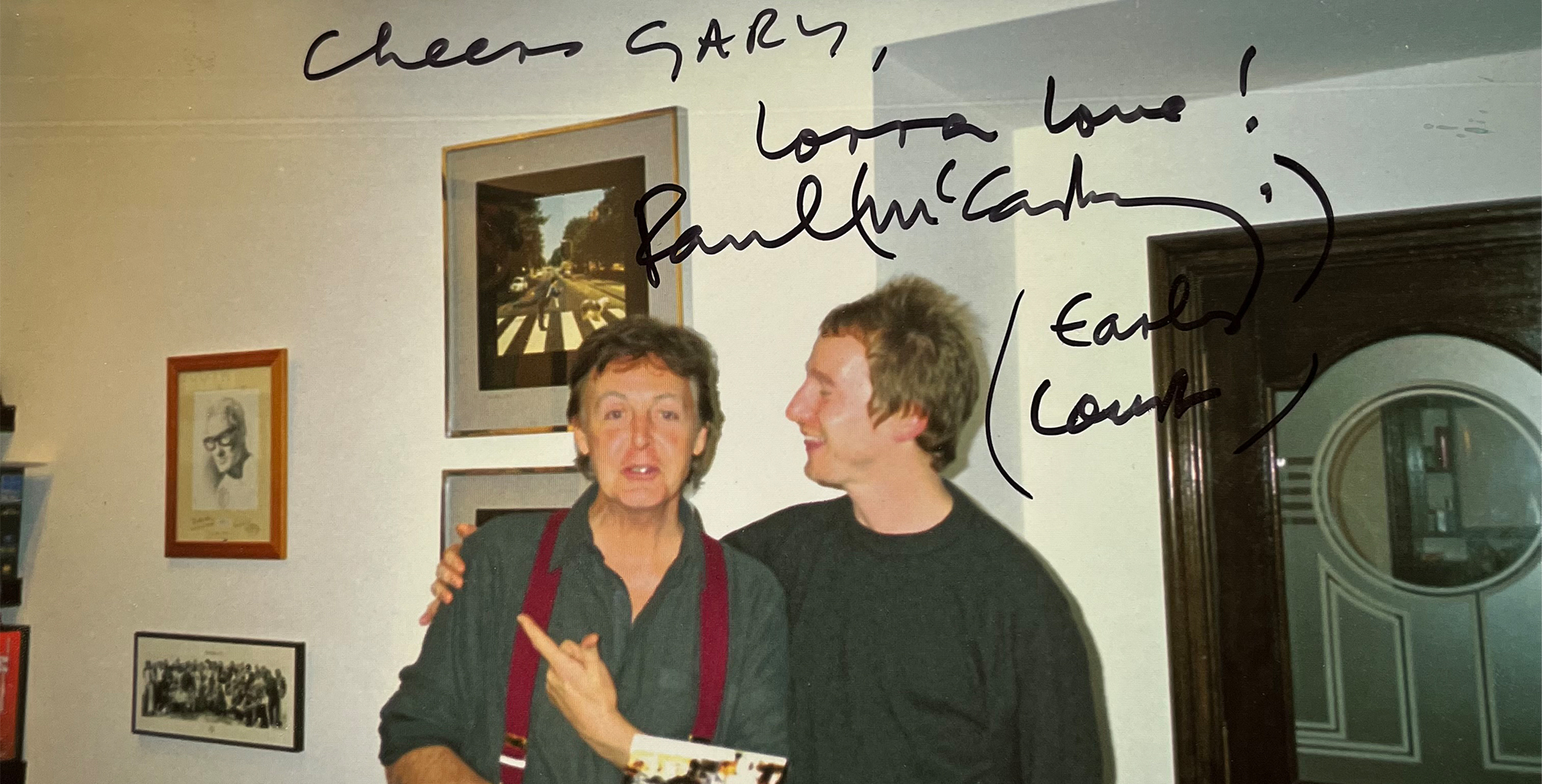 In celebration of his headline set at Glastonbury and marking the auspicious occasion of his 80th birthday, our latest Pretty Green Radio Spotify playlist is dedicated to the legend that is Sir Paul McCartney. Representing the world’s greatest living songwriter, we asked presenter and DJ Gary Crowley to put together the ultimate playlist of Paul McCartney covers.


PLAYLIST AND WRITE UP BY
GARY CROWLEY

Don't get me wrong, Dylan, Stevie, Smokey, Brian Wilson and Carol King are all right up there, but song for song, tune for tune I’d say Sir James Paul McCartney CH MBE just pips it for me.
One of pop’s supreme melodists, Macca's bountiful songbook includes many of the best-loved, most-performed songs of the past 50 plus years. Many of those songs were co-written with his former band mate and pal John Lennon (well in theory anyway) but the actuality was more often than not, they wrote separately and after the split of The Beatles, McCartney, out of all four consistently topped the charts.

Bob Dylan (who does a crackin', croaky version of "Things We Said Today" btw) famously said of him in 2007, "I'm in awe of McCartney. He's about the only one that I'm in awe of." And let's face it, Mr Zimmerman knows a thing or two about a thing or two!

My introduction to the magic of Paul McCartney stretches back to 1974. It came via my school pal David Pound who I will be eternally grateful to, for lending me his copy of Paul McCartney And Wings "Band On The Run" album. I simply devoured it. Very quickly I invested in the Red and Blue Beatles “best ofs” compilations and the rest - as they say - is history. I was in the club.

To celebrate this landmark birthday, those cool folk at Pretty Green have asked me to compile a Top 20 of my favourite Macca cover versions. “Easy-peasy” I said, but actually this list is ever-changing for me. Hopefully the selection below gives you a taster of our greatest tunesmith’s breadth and awe-inspiring talent.”


LITTLE RICHARD -
I SAW HER STANDING THERE


Who better to start with than one of Macca's heroes: Rock n Roll titan Little Richard and his funky take on the song that kicked started the Fab's classic 1963 debut album "Please Please Me". If there's such a thing as Punk Soul, then this is it. That voice!


Legend has it that McCartney actually dreamed the tune to “Yesterday.” Apparently Motown great Marvin's rendition (out of literally hundreds), is Paul's favourite. Beautiful.


STEVIE WONDER -
WE CAN WORK IT OUT


If you're doing a cover version, surely the aim is to put your own stamp all over it and Stevie certainly succeeds, giving it soul in abundance.


JOE COCKER -
WITH A LITTLE HELP FROM MY FRIENDS


A true Lennon and McCartney collaboration, this was written for Ringo and the Sgt Pepper album. Cocker's take turns it upside down and inside out and just bleeds passion. It had to be on this list.


One of the standouts of "The Art of McCartney" collection for me. The Cure stay pretty close to the original but do a first rate job with James McCartney along for the ride and a version that simply bursts with joy.


As one would expect, the combination of the voice of the Wicked Pickett and the guitar of Duane Allman is nothing short of superb.


Elliot's love of the Beatles was apparently passed down from his parents and he went on to cover a cluster of their songs over his career. His 'live' version of "Blackbird" is something special. Both beautiful and fragile.


Paul Weller was famously once asked who his favourite teachers were and quick as a flash, answered back "I had four – John, Paul, George and Ringo!' For Sir Paul's 70th birthday, the Modfather honoured one of his inspirations with a barnstorming cover of the White Album gem.


SIOUXSIE AND THE BANSHEES -
HELTER SKELTER


Helter Skelter, Long considered to be one of the first proto Punk songs. The Banshees’ take on the White Album nugget is both deliciously dark and menacing and oozes power. This could've been written for Siouxsie in mind.


MICHAEL PENN/AIMEE MAN -
TWO OF US


Inspired by his love of the Everlys, I love this version of the "Let It Be" fave. Aimee and Michael's voices just complement each other perfectly. I also love the footage of the Beatles themselves working this one out in the recent ‘Get Back’ doc.


THE LANGLEY SCHOOLS MUSIC PROJECT -
THE LONG AND WINDING ROAD


Originally recorded back in 1976-1977 and finally seeing the light of day in 2001, The Langley Schools Music Project was a 60-voice chorus of rural Canadian school children, age 9-12 who recorded Pop classics of the day from the likes of the Beach Boys, David Bowie, the Carpenters and Paul McCartney's "The Long and Winding Road" - which is just so pure and touching.


Taken from the "I Am Sam" soundtrack (and a good movie if you've never seen it, about a Beatle loving man with special needs fighting for the custody of his daughter) I love Cave's no frills, understated version.


Recorded for a John Lewis TV ad back in 2017, Elbow's interpretation is just lovely. Guy Garvey's voice simply soars on this.


BADFINGER -
COME AND GET IT


What a band these guys were and what a debut single this was. Written and produced by Paul, it's a stone cold classic and the best Fabs single they never made!


One band I would dearly have loved to have seen in their prime, were the Faces who took Macca's classic ballad from his 1970 debut solo album and made it something equally special. If you get 6 minutes in your day, watch the band in full flight covering this up on YouTube.


Talking of that very first "McCartney" solo album, ‘Every Night' was one of it's many highlights and Richie's soulful version is just quality. There's a wonderful interview/performance with the great man on YouTube called "Speaking Freely: Richie Havens" which is an absolute delight.


This is simply joyful. The combination of the voice of one of the Philly greats and the Macca classic is absolutely life affirming.


Tucked away on the the UK version of Power-pop princelings Jellyfish's classic "Bellybutton" album, this is a terrific souped up version of the "Band On The Run" rocker.


Guns And Roses were apparently initially unsure about covering this Paul and Linda McCartney epic and nervous as to whether they could do it justice or not. Thank god Axl and Slash et al did have a bash as it quickly became a highlight of their concert performances.


And finally an honorary mention to the Jimi Hendrix Experience and their blistering version of "Sgt Pepper" which still leaves me reeling in wonder all these years later.

Listen to the playlist now on spotify.

SUGGEST A TRACK
Listening at home? Tag your photos @prettygreenltd